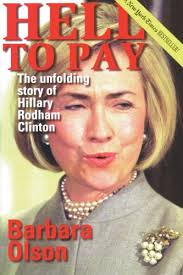 I don’t usually write about politics on this web site, but I thought I would share some thoughts on Hillary Clinton’s spiritual roots because it reveals how important it is for shepherds to keep guard over their flock.

Back in the 90’s I was a member of the Conservative Book Club. One of their offerings was a book by Barbara Olson called, Hell to Pay: The Unfolding Story of Hillary Rodham Clinton. It was published in 1999. (Olson was killed on September 11th. She was on the plane that crashed into the Pentagon.)

It’s pretty common knowledge that Hillary’s parents were Republicans and she was once a “Goldwater Girl.” But something changed her viewpoints. Perhaps it was merely the Spirit of the Age. It was a time when rock and roll and idealistic rebellion ruled, but maybe it was something more.

In Olson’s book, there’s a section entitled, “The University of Life.” This little sub-section of the third chapter tells the story of Hillary’s youth minister, Rev. Donald G. Jones. Hillary attended a Methodist church that leaned toward the social gospel. “Be ye doers of the Word and not hearers only” was their motto. But doing good deeds for Jesus wasn’t enough for Reverend Jones.

Hillary was only fourteen when he came to her church. Jones was on a mission to transform society…and he would begin by opening the eyes of his little lambs to the realities of the evils in the larger world. Olson writes:

The Reverend Jones jolted his students with a bracing mixture of counterculture and high culture, the poems of e.e. cummings, J.D. Salinger’s The Catcher in the Rye, and a discussion on Picasso’s Guernica. He drew explicit parallels between the utopia of Karl Marx and the heavenly kingdom. He took the group into inner-city Chicago, where Hillary for the first time came to know poor people, “trailer people,” black people, Hispanic people–families who, he taught, would not have been welcome in Park Ridge, even if they could have afforded it. [1]

In an interview with Arkansas journalist Meredith Oakley, Reverend Jones recalled how his kids from Park Ridge had never seen poverty before.

Religion, going to church, tended to function there for most people to reinforce their rather traditional conservative values, and so when I came in and took that white, middle-class youth group into the inner city of Chicago, that was quite radical. [2]

One of Hillary’s most memorable experiences in the University of Life (the name the kids in the youth group gave to Jones’ outings) was when they all loaded onto a church bus and went to Orchestra Hall on Michigan Avenue in Chicago to hear Martin Luther King, Jr. speak. The youth group was able to go backstage and meet Dr. King. Hillary shook his hand.

I’m not saying that any of these experiences were bad. Dr. King is one of my personal heroes. I wish I could have shaken his hand. But Hillary’s experiences were viewed through the prism of Reverend Jones’ theology.

Olson described Reverend Jones as “an intense, energetic, thirty-year-old” who was “newly minted from divinity school in Manhattan.” [3] Jones was committed to the theology of Paul Tillich, “who redefined Christianity in terms of the German idealistic tradition and existentialism.” [4] Tillich argued, according to Olson, that Christianity could only be revived by throwing off its middle-class American cultural roots and critiquing society through Marxist thought. After serving in Hillary’s Methodist church for two years, Jones went on to become a professor of theology at Drew University.

These few little paragraphs in Hell to Pay show how important it is for shepherds to guard their flocks. I don’t know if Hillary’s senior pastor was faithful to the scriptures, but I do know he was negligent when he let a radical, Marxist, leftist “minister” have free reign over his youth group for two years.

The impact that Reverend Jones had on Hillary’s fresh young impressionable mind has rocked our nation. She has been one of the most controversial and divisive figures in American political history. Although she may have started out being filled with hope that she could change society for the better, somewhere along the way she seems to have lost her idealism.

When she went to college she traveled further down the road of radicalism and began opposing the “evils of war, racism, sexism, and poverty” [5] and Reverend Jones’ Marxist influence seems to have informed her positions, but after the fall of the Soviet Union, Marxism was widely discredited.

Now it seems she has become pragmatic. She puts her finger to the wind of political expediency and changes positions as necessary. She seems to be interested in power, not because she has any particular views that she believes in, but because she egotistically wants a place in history.

I pray, that if she’s elected she will be wise, but since a grievous wolf was able to get through the gate of her church, and she was exposed to his false doctrines, I’m very concerned about the influence she will have on the world that my loved ones and I live in.

I’ve written in many places on this web site about the need for shepherds to keep guard over the flock . If only those who kept watch over Hillary’s soul, the gatekeeper and shepherd of the flock, would have been more responsible, perhaps we wouldn’t be in this mess. Perhaps this is why God pronounces “woes” on the shepherds who have been negligent in their duties.