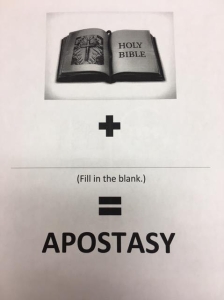 Apostasy is a grievous sin. It means “to fall away” from the faith. In the same way that Lucifer and one third of the angels fell away from God, Christians can fall away from God. I won’t argue whether they were ever with God or not, but at some point they made a public declaration of their rebellion.

For Lucifer, the moment of rebellion came when he proudly declared he wanted to be

Apostate Christians believe the same lies as Eve and the fallen angels. They believe in extra-biblical (something added to the Word of God) teachings or revelations that claim to make them wise–even if it conflicts with the Word of God.

The beginning of all evil can be found in this inclination to add to the Word of God. The Old Testament prophets, and even Jesus, called this a form of spiritual adultery. Is it any coincidence that Ezekiel, Jeremiah, Hosea, and all the other Old Testament prophets framed their arguments against apostate Israel in terms of a marriage relationship?

Jeremiah revealed the heart of God when he said Israel “played the harlot with many lovers” (Jer. 3:1, KJV) when she added Baal worship to the worship of Yahweh. Because the Israelites of Jeremiah’s time never stopped worshiping God, and just added Baal (the god of prosperity and fertility) to their worship, they never even considered that they had fallen from God.

Hosea was even commanded to marry an unfaithful woman as an allegorical picture of Israel’s adultery. God lamented the situation, asking how long his people would be incapable of purity (Hosea 8:5). To Him, Israel was like an unfaithful wife who kept other lovers on the side.

Jesus carried on this line of thought when he pointed to the Pharisees and Sadducees and called them “a wicked and adulterous generation” (Matt. 16:4). Why were they evil? Because they needed the addition of a “sign” (the Word wasn’t enough) to prove Jesus was the Messiah, and they had added their own traditions to the Word of God, “teaching for doctrines the commandments of men” (Mark 7:7).

When the Christian church adds to the Word, or worships something alongside of the Word, they are fallen away from God. As I hope I’ve documented on this website, spiritual adultery, or apostasy, has happened over and over in Christian history, and when it occurs, it’s always accompanied by war, torture, slavery, abuse, genocide, tyranny, and all other forms of human suffering.

While progressives and atheists point to fundamentalist Christians as purveyors of evil, nothing could be further from the truth. History reveals that it was apostates who betrayed God, and consequently, betrayed humanity.

When Adam and Eve ate of the forbidden fruit, the whole world fell from a state of perfect provision–and human suffering began. When Israel began worshiping Baal or Molech alongside of Yahweh, they no longer treated each other with kindness and love (read Isaiah 1!).

And when the church began to blend Greek philosophy and Roman ritualism with the Word, darkness began to descend upon all of western civilization. It remained in that state of darkness for a millennium–until the call went out during the Reformation to return to the Word alone (sola scriptura) as our source of truth.

There have always been two entities in the world claiming to be the CHURCH, but only one of them is the true church. The other is an apostate. She is a harlot with other lovers on the side. Using the name of “Jesus,” she goes around seducing people away from the truth of the Word, convincing them that they will be wiser for it. No need to get rid of God–just add the current wisdom of the world to the teachings of Christ and create a jumbled up blend that is no longer the truth. And by the way, the destruction that follows can be blamed on God!

For God’s sake, can’t we keep the Word of God pure?

• It was the false church who burned people at the stake by blending in Greek philosophy, Roman ritualism, and false teaching with the doctrines of Christ.

• It was the false church who squelched science by blending Aristotelian natural philosophy into the doctrines of Christ.

• It was the false church who supported slavery by blending scientific racism (polygenism) in with the doctrines of Christ.

• It was the false church that supported abusive colonialism by blending Darwinism into the doctrines of Christ.

• It was the false church who supported Nazism by blending in the latest philosophy (Hegelianism) and science (Darwinism) in with the teachings of Christ.

The burning, torture, and tyranny of the Inquisition, slavery, the Holocaust, ignorance, and abuse of the helpless has never been caused by a faithful Christian who loves the Bible and keep its doctrines pure, but it has always been caused by an apostate Christian who tosses aside the Word of God for another source of wisdom.

We can see this same challenge in our own generation. How many Christians have gone astray by adding Darwinism, psychology, quantum physics, prophetic revelations, political ideologies, business principles, mammon (through the prosperity gospel), angelic visitations (such as those that began Islam or Mormonism), ecumenism, contemplative spirituality, dreams, visions, or even fictional narratives (such as the book The Shack)?

Whether or not a person is faithful to the scriptures is a sure way to discern whether a person has become apostate. If a Christian places other sources of knowledge or wisdom above, or beside, the sure teachings of the scriptures, they may be going astray in much the same way as an unfaithful spouse–and someone will suffer for their unfaithfulness to God.  Satan and Adam and Eve are examples of the consequences that come from falling away.

“Let a man so account of us, as of the ministers of Christ, and stewards of the mysteries of God. Moreover it is required in stewards, that a man be found faithful.” (1 Cor. 4:1-2, KJV)

(2) James Strong, moicheuo (#3431). “A Concise Dictionary of the Words in the Greek Testament; With Their Renderings in the Authorized English Version.” The Exhaustive Concordance of the Bible. (Nashville: Abingdon, 1980), 49.