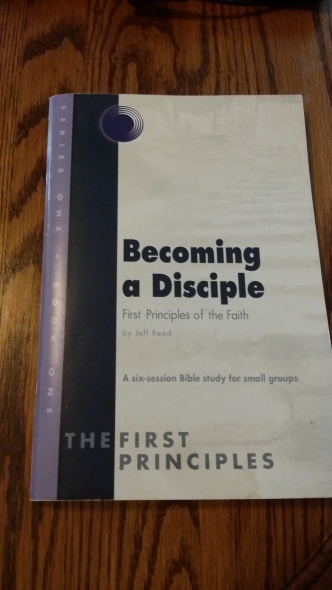 Jeff Reed insists, in his BILD International First Principles series that Christians need to learn the “first principles” because “they represent the first things that must be learned, upon which everything else is built. If they are not carefully understood, everything else will be distorted.” (p. 8) He then quotes Hebrews 5:12-14:

Concerning him we have much to say, and it is hard to explain, since you have become dull of hearing. For though by this time you ought to be teachers, you have need again for someone to teach you the elementary principles of the oracles of God, and you have come to need milk and not solid food. For everyone who partakes only of milk is not accustomed to the word of righteousness, for he is a babe. But solid food is for the mature, who because of practice have their senses trained to discern good and evil.

Then, instead of moving a little further down in the scriptures to Hebrews 6:1-2 where the writer of Hebrews actually lists the “first principles of the doctrines of Jesus Christ,” he replaces these first principles with the “kerygma” and “didache” formulated by C.H. Dodd (someone he characterizes as one of the greatest New Testament scholars” of the twentieth century. (p. 16)

This is what Hebrews 6:1-2 says about the “first principles”:

Therefore leaving the principles of the doctrine of Christ, let us go on unto perfection; not laying again the foundation of 1] repentance from dead works, and of 2] faith toward God, the 3] doctrine of baptisms, and of 4] laying on of hands, and of 5] the resurrection of the dead, and of 6] eternal judgment.

The foundation principles of the doctrines of Jesus Christ  are listed right in the scriptures, yet Reed replaces these principles with Dodd’s “didache” and “kerygma.” On page 33 of the first book in Reed’s series, Becoming a Disciple: First Principles of the Faith, moral/ethical teachings are listed as the content of the “didache.” He does this in spite of the fact that the word “didache” means “teaching” and it applies to all doctrines, not just the moral and ethical teachings. Here are a few examples of how “didache” is used in the New Testament:

And it came to pass, when Jesus had ended these sayings, the people were astonished at his doctrine [didache]: (Matt. 7:28, KJV)

And they continued steadfastly in the apostles’ doctrine [didache] and fellowship, and in breaking of bread, and in prayers. (Acts 2:42, KJV)

Now I beseech you, brethren, mark them which cause divisions and offences contrary to the doctrine [didache] which ye have learned; and avoid them. (Romans 16:17, KJV)

The Greek word “didache” is the word for doctrine or teaching, but Reed says “Dodd identifies seven major propositions in the didache.”

The call to repent from dead works, to have faith toward God, the doctrine [didache] of baptisms, laying on of hands, resurrection from the dead, and eternal judgment are all part of the “didache” even though they could also be considered to be part of the kerygma.

Why is it important to mention this exchange? What difference does it make?

But….Catholics and Protestants can both agree on C.H. Dodd’s “kerygma”:

–The prophecies are fulfilled, and the new Age is inaugurated by the coming of Christ.

–He was born of the seed of David.

–He died according to the Scriptures, to deliver us out of the present evil age.

–He rose on the third day according to the Scriptures.

–He is exalted at the right hand of God, as Son of God and Lord of quick and dead.

–He will come again as Judge and Savior of men.

(By the way, C.H. Dodd is an interesting choice as Reed’s admired theologian. Dodd was a proponent of “realized [or inaugurated] eschatology.” He was an admirer of Adolf Harnack who was a proponent of the social gospel. Dodd’s eschatology is known as “already/not yet” theology. Although this could be a balanced way of looking at the history of the church and its future destiny, in Dodd’s case, he allegorized not only the stories of Genesis, but also the eschatological scriptures. Was this a conscious choice by Reed? I don’t know, but it causes flags to go up if you believe that the church will be recsued from evil by Jesus in the last days, rather than the church preparing the kingdom for the Lord to return to.)

Since Dodd’s “kerygma” contains true proclamations, why should I care if Reed replaces the “first principles” found in Hebrews with Dodd’s formulation? Why should I care if the “didache” (doctrines or teachings) doesn’t only consist in moral and ethical teachings, but also includes other doctrines of the faith, such as the foundation principles listed in the Scripture? Since the entire series is called the “First Principles,” doesn’t it make sense that it should actually teach the first principles as they are listed in the Bible? Doesn’t it make sense that God would want us to follow His actual teaching on the subject? And doesn’t Reed himself acknowledge that “they represent the first things that must be learned, upon which everything else is built. If they are not carefully understood, everything else will be distorted”? In this he is in agreement with the psalmist:

“If the foundation is destroyed, then what shall the righteous do?” (Psa. 11:3).

I considered that perhaps Reed incorporated the Hebrews 6:1-2 list of first principles into the material even though he doesn’t use Hebrews as a direct source, but there was no teaching on “repentance from dead works” or “faith towards God.” (There was a teaching on baptism, though.)

Perhaps I’m cynical, but I wonder if this exchange was on purpose. Could Jeff Reed actually be attempting to develop a curriculum that allows a unified, ecumenical church that focuses on a “core” Gospel (as Rex Koivisto writes in “The Search for a Core Orthodoxy for Catholicity,” one of the theological readings in Understanding the Essentials of Sound Doctrine) and that is missional in its focus, rather than doctrinal, in order to respond to the emerging postmodern ecumenical paradigm as foretold by Hans Kung and David Bosch (and shown in this chart from Understanding the Essentials of Sound Doctrine)? 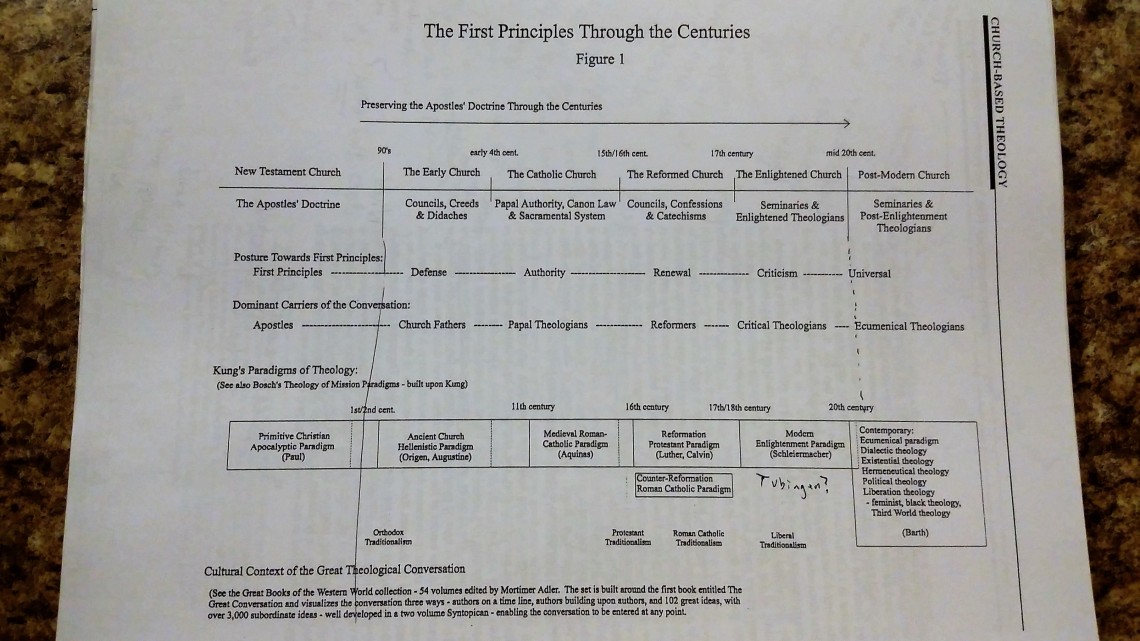 Again, I point to  the “Unleashing a Torrent” promotion for BILD International (p. 3) as an example of the ecumenical unity and cooperation that pleases Jeff Reed.

BILD International has partnered with three-quarters of the major Indian church-planting organizations–each ready to train between 25,000 and 100,000 NEW LEADERS for Christ. They represent Christian “streams” including Protestant, Pentecostal, Catholic, Anglican, and many others. This unprecedented cooperation–among groups so theologically diverse–makes a huge impact with incredible, documented success. Laying aside their “labels” and differences, they have joined forces to reduce duplication, harness synergies, and create an incredible force for Jesus Christ.

When Jeff Reed exchanged the foundation principles of the doctrines of Jesus Christ as found in Hebrews for the “kerygma” and “didache” of C.H. Dodd, did he have a motive? Was he attempting to water down the teachings of the New Testament in order to allow for ecumenical unity–something he obviously knew was a characteristic of the postmodern church (as seen on the above chart that he created)?

If you have no problem with being a part of this new “force for Jesus Christ,” then using Reed’s material may be just fine for you. But if you remember the Reformation, and the price that was paid by our forefathers (burning in the flames of the Inquisition) for the sake of preserving sound doctrine, and you love ALL of the teachings in the scriptures, and aren’t willing to compromise truth in order to be a part of Reed’s ecumenical vision, then perhaps you may want to reconsider whether or not you participate in BILD International.