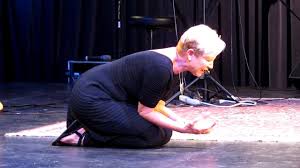 Heidi Baker has an amazing story. She’s had a life of service on the mission field in Africa and Asia. She’s well-educated. She says she has experienced the miraculous. She encourages Christians to lay down their life for the Lord. It’s very difficult to find fault with Heidi.

Even though she has led an exemplary life of love and kindness, and seems to have started out with Jesus in purity, unfortunately I have to argue that she no longer serves the Lord in obedience and truth. I watched a video where she prayed for the “Azusa Now” rally. In that video she seems to be very intimate with the Lord, but how is it possible that a person who loves Jesus so much could violate so many of his teachings?

I’m saddened to write this, but in order to protect the sheep and  keep them from being deceived I need to show the ways Heidi is being led astray by seducing spirits. She claims to love Jesus so much, but Jesus said, “If you love me, obey my commandments.” (John 14:15) Here is a list of the ways Heidi disobeyed the commandments of Jesus (and rejected the scriptures) in that one prayer for “Azusa Now.”

“And when you pray, do not heap up empty phrases as the Gentiles do, for they think that they will be heard for their many words.” (Matthew 6:7, ESV)

“And when you pray, you must not be like the hypocrites. For they love to stand and pray in the synagogues and at the street corners, that they may be seen by others. Truly, I say to you, they have received their reward. 6 But when you pray, go into your room and shut the door and pray to your Father who is in secret. And your Father who sees in secret will reward you.” (Matthew 6:5-6 ESV)

Jesus commanded us to not pray long prayers in public. He taught us to pray the Lord’s Prayer (as a model). You may argue that Heidi isn’t praying this way to be seen, but if that were the case, then all she has to do is obey the commandment of her Lord to not pray long prayers in public–and pray in secret instead. If she truly loved Jesus, wouldn’t she obey this commandment?

“Therefore, one who speaks in a tongue should pray that he may interpret. 14 For if I pray in a tongue, my spirit prays but my mind is unfruitful. 15 What am I to do? I will pray with my spirit, but I will pray with my mind also; I will sing praise with my spirit, but I will sing with my mind also. 16 Otherwise, if you give thanks with your spirit, how can anyone in the position of an outsider say “Amen” to your thanksgiving when he does not know what you are saying?”

If a Christian prays in tongues in public, there needs to be an interpreter because it’s wrong to say “Amen” to a prayer spoken in tongues since we have no idea what the person prayed. Yet Heidi prays many prayers in tongues without an interpretation.

If Heidi prays with her spirit, she must also pray with her mind. In other words, if she prays with tongues, she must also give the interpretation. (The “position of an outsider” is simply a person who doesn’t know the spiritual language that is being spoken.) Prayers spoken in tongues without an interpretation are not able to be prayers of agreement.

“Again I say to you, if two of you agree on earth about anything they ask, it will be done for them by my Father in heaven. 20 For where two or three are gathered in my name, there am I among them.” (Matthew 18:19-20, ESV)

“But the fruit of the Spirit is love, joy, peace, patience, kindness, goodness, faithfulness, gentleness, self-control; against such things there is no law.” (Galatians 5:22-23, ESV)

Not being able to control an action brought about by “the spirit” is evidence that the source of her spiritual experience isn’t the Holy Spirit, but is another spirit.

Catholics have so many teachings that are contrary to the truth of the scriptures (including the priesthood, celibacy, purgatory, the papacy, the Eucharist, indulgences, the role of Mary, repetitive prayers, and on and on . . . ) Catholics need to love the truth and come out of their false religion, not be told they are our brothers and sisters in the Lord.

What “spirit” will be poured out on those who have false doctrines and practices? The Holy Spirit? Do we forget that Jesus is the TRUTH? (John 14:6) and that the Holy Spirit is the Spirit of TRUTH (John 14:17, 16:13)?! Why would the Spirit of Truth manifest in a place that is filled with lies and disobedience?

As wonderful as Heidi and her ministry appears to be, we have to love Jesus and the truth of his Word more than anything else. We were warned this day would come–the day when men would not endure sound doctrine, when they would give heed to seducing spirits and be deceived by false signs and wonders because they didn’t love the truth . . . a day when even the very elect might be deceived. And this delusion would come by the hand of God–to test them and see if they would choose the truth over manifestations of power and signs and wonders.

“The coming of the lawless one is by the activity of Satan with all power and false signs and wonders, 10 and with all wicked deception for those who are perishing, because they refused to love the truth and so be saved. 11 Therefore God sends them a strong delusion, so that they may believe what is false, 12 in order that all may be condemned who did not believe the truth but had pleasure in unrighteousness.” (2 Thessalonians 2:9-12, ESV)

If you think I’m being too critical of Heidi because I point out her disobedience to the commands of Jesus, then I would point you to another teaching of our Lord:

” Preach the word; be instant in season, out of season; reprove, rebuke, exhort with all long suffering and doctrine. For the time will come when they will not endure sound doctrine; but after their own lusts shall they heap to themselves teachers, having itching ears; And they shall turn away their ears from the truth, and shall be turned unto fables.” (2 Timothy 4:2-4, KJV)

If anybody knows Heidi Baker, perhaps they could give her a copy of this article. I have to believe that Heidi loves Jesus, but if she does love Him as much as she says she does, then she needs to repent and begin to obey the commandments of her Lord and the teaching of sound doctrine.

” . . . because God hath from the beginning chosen you to salvation through sanctification of the Spirit and belief of the truth: ”  (2 Thessalonians 2:13; KJV)

“But false prophets also arose among the people, just as there will be false teachers among you, who will secretly bring in destructive heresies, even denying the Master who bought them, bringing upon themselves swift destruction.” ( 2 Peter 2:1, ESV)

Why were the Pharisees rebuked by Jesus for being of their father, Satan, who had no truth in him (John 8:44) if truth wasn’t important to the Lord?  Jesus called the Pharisees “sons of hell.”(Matthew 23:15)  We are saved, not only by grace, but by grace through faith. Faith is the belief in the truth.

The Lord is nigh unto all them that call upon him, to all that call upon him in truth. (Psalm 145:18; KJV)
O Lord, are not thine eyes upon the truth? thou hast stricken them, but they have not grieved; thou hast consumed them, but they have refused to receive correction: they have made their faces harder than a rock; they have refused to return. (Jeremiah 5:3; KJV)
Note:  Stacey Campbell, the “hissing prophetess” is on the board of directors at IRIS Global (Heidi’s ministry). I would point you to this video for an interesting explanation of what is happening with all of the strange manifestations of people like Heidi Baker, Stacey Campbell, Todd Bentley and his new wife, and others.