This may be news from 2001, but I thought I would bring it out again to show that the science concerning Darwinism isn’t “settled.” 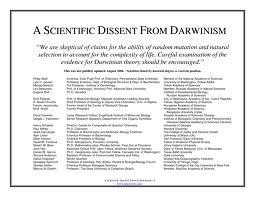 Here is what they say about themselves:

During recent decades, new scientific evidence from many scientific disciplines such as cosmology, physics, biology, “artificial intelligence” research, and others have caused scientists to begin questioning Darwinism’s central tenet of natural selection and studying the evidence supporting it in greater detail.

Yet public TV programs, educational policy statements, and science textbooks have asserted that Darwin’s theory of evolution fully explains the complexity of living things. The public has been assured that all known evidence supports Darwinism and that virtually every scientist in the world believes the theory to be true.

The scientists on this list dispute the first claim and stand as living testimony in contradiction to the second. Since Discovery Institute launched this list in 2001, hundreds of scientists have courageously stepped forward to sign their names.

The list is growing and includes scientists from the US National Academy of Sciences, Russian, Hungarian and Czech National Academies, as well as from universities such as Yale, Princeton, Stanford, MIT, UC Berkeley, UCLA, and others.

A Scientific Dissent From Darwinism
“We are skeptical of claims for the ability of random mutation and natural selection to account for the complexity of life. Careful examination of the evidence for Darwinian theory should be encouraged.”

“There is scientific dissent from Darwinism. It deserves to be heard.”